Chicago is world-famous for its plethora of unique architectural styles, from Chicago Bungalows and Two-Flats to the grand Graystones along Logan Boulevard and Lawndale Avenue, from the skyscrapers of the Loop as well as a wealth of sacred architecture such as the city’s ornate “Polish Cathedrals”.

Louis Sullivan was perhaps the city’s most philosophical architect. Realizing that the skyscraper represented a new form of architecture, he discarded historical precedent and designed buildings that emphasized their vertical nature. This new form of architecture, by Jenney, Burnham, Sullivan, and others, became known as the “Commercial Style,” but it was called the “Chicago School” by later historians. 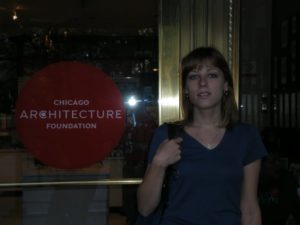 Since 1963, a “Second Chicago School” emerged from the work of Arch. Ludwig Mies van der Rohe at the Illinois Institute of Technology in Chicago. The ideas of structural engineer Fazlur Khan were also influential in this movement, in particular his introduction of a new structural system of framed tubes in skyscraper design and construction.

The first building to apply the tube-frame construction was the DeWitt-Chestnut Apartment Building which Khan designed and was completed in Chicago by 1966.

This laid the foundations for the tube structures of many other later skyscrapers, including his own constructions of the John Hancock Center and Willis Tower in Chicago and can be seen in the construction of the World Trade Center, Petronas Towers and most other supertall skyscrapers since the 1960s.

Willis Tower would be the world’s tallest building from its construction in 1974 until 1998 (when the Petronas Towers was built) and would remain the tallest for some categories of buildings until the Burj Khalifa was completed in early 2010.

Chicago is well known for its wealth of public art, including works by such artistic heavyweights as Chagall, Picasso, Miró and Abakanowicz that are all to be found outdoors.

Frank Lloyd Wright’s Prairie School influenced both building design and the design of furnishings. In the early half of the 20th century, popular residential neighborhoods were developed with Chicago Bungalow style houses, many of which still exist.

The Frederick C. Robie House is a U.S. National Historic Landmark on the campus of the University of Chicago in the South Side neighborhood of Hyde Park in Chicago, Illinois. Built between 1909 and 1910, the building was designed by architect Frank Lloyd Wright and is renowned as the greatest example of Prairie School, the first architectural style considered uniquely American. 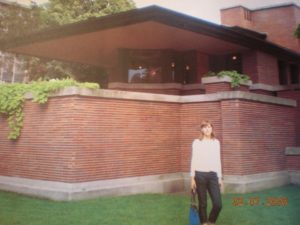 The Frank Lloyd Wright Home and Studio (1889/1898) served as Wright’s private residence and workplace from 1889 to 1909—the first 20 years of his career. Wright used his home as an architectural laboratory, experimenting with design concepts that contain the seeds of his architectural philosophy. 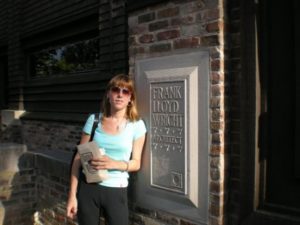 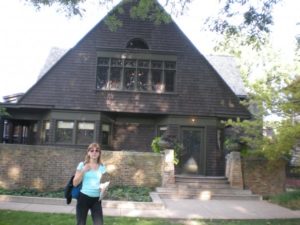 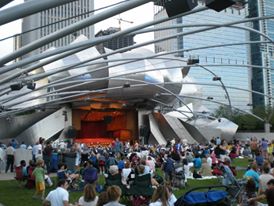 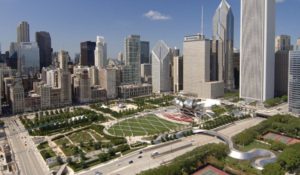 Jay Pritzker Pavilion is one of the most popular destinations in Chicago for a dizzying array of free cultural performances.

Designed by Frank Gehry, the Jay Pritzker Pavilion stands 120-feet above ground, with a billowing “headdress” composed of individual brushed stainless-steel ribbons that frame the stage opening and connect to an overhead trellis of crisscrossing steel pipes. The stage area of the Pavilion is sheathed completely with Douglas fir and features a series of portable risers and a choral terrace that can accommodate up to a 120-member collective orchestra and choir. Large glass doors that can enclose the stage area when shut, allow the Pavilion to be used during winter months for an assortment of public functions such as banquets, receptions, and lectures. An additional feature is a system of decorative colored lights that when projected onto the proscenium, transform the face of the Pavilion.

Cloud Gate is a public sculpture by Indian-born British artist Sir Anish Kapoor, that is the centerpiece of AT&T Plaza at Millennium Park in the Loop community area of Chicago, Illinois.  Constructed between 2004 and 2006, the sculpture is nicknamed The Bean because of its shape.

Made up of 168 stainless steel plates welded together, its highly polished exterior has no visible seams. It measures  10 x 20 x 13 m , and weighs 110 short tons.
Kapoor’s design was inspired by liquid mercury and the sculpture’s surface reflects and distorts the city’s skyline. Visitors are able to walk around and under Cloud Gate’s 3.7 m high arch. 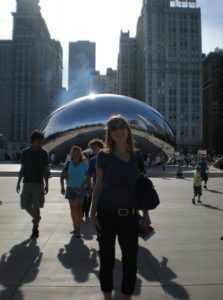 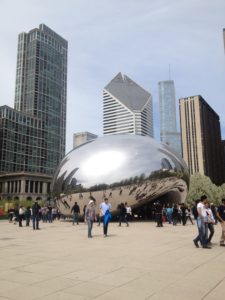 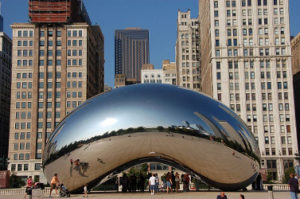 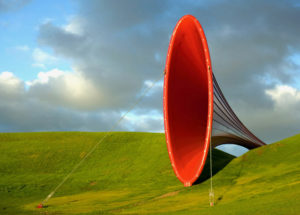 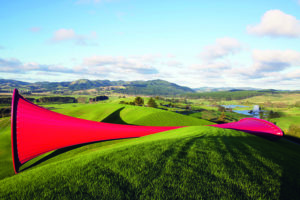 Kapoor Versailles will be on view at the Palace of Versailles from June 9 through November 1, 2015.

Many of the works are installed throughout the gardens in the Grand Perspective and Star Grove. Kapoor’s Shooting into the Corner is installed in the Jeu de Paume room. 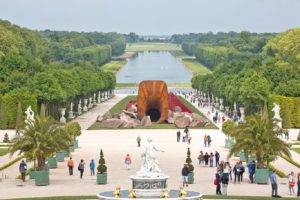 Organic architecture is a philosophy of architecture which promotes harmony between human habitation and the natural world. This is achieved through design approaches that aim to be sympathetic and well-integrated with a site, so buildings, furnishings, and surroundings become part of a unified, interrelated composition.

The term “organic architecture” was coined by Frank Lloyd Wright (1867–1959), though never well-articulated by his cryptic style of writing:
“So here I stand before you preaching organic architecture: declaring organic architecture to be the modern ideal and the teaching so much needed if we are to see the whole of life, and to now serve the whole of life, holding no traditions essential to the great TRADITION. Nor cherishing any preconceived form fixing upon us either past, present or future, but instead exalting the simple laws of common sense or of super-sense if you prefer determining form by way of the nature of materials ..

Organic architecture is also translated into the all inclusive nature of Wright’s design process. Materials, motifs, and basic ordering principles continue to repeat themselves throughout the building as a whole. The idea of organic architecture refers not only to the buildings’ literal relationship to the natural surroundings, but how the buildings’ design is carefully thought about as if it were a unified organism. Geometries throughout Wright’s buildings build a central mood and theme. Essentially organic architecture is also the literal design of every element of a building: From the windows, to the floors, to the individual chairs intended to fill the space. Everything relates to one another, reflecting the symbiotic ordering systems of nature.

A well-known example of organic architecture is Fallingwater, the residence Wright designed for the Kaufmann family in rural Pennsylvania.

Wright had many choices to locate a home on this large site, but chose to place the home directly over the waterfall and creek creating a close, yet noisy dialog with the rushing water and the steep site. The horizontal striations of stone masonry with daring cantilevers of colored beige concrete blend with native rock outcroppings and the wooded environment. 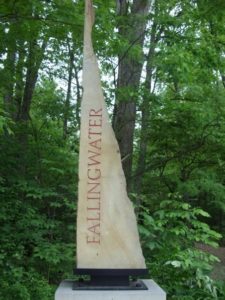 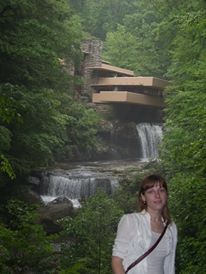 The Metropolitan Museum of Art of New York City, is the largest art museum in the United States. 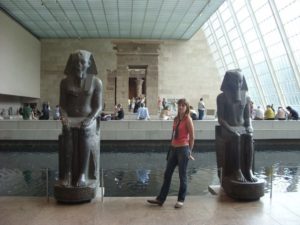 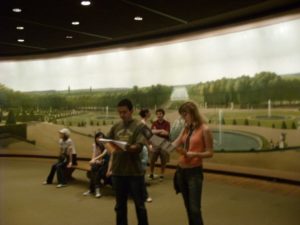 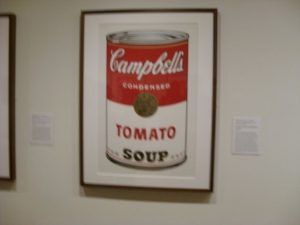 The Solomon R. Guggenheim Museum, Arch. Frank Lloyd Write often referred to as The Guggenheim, is an art museum located at 1071 Fifth Avenue on the corner of East 89th Street in the Upper East Side neighborhood of Manhattan, New York City.

It is the permanent home of a continuously expanding collection of Impressionist, Post-Impressionist, early Modern and contemporary art and also features special exhibitions throughout the year. 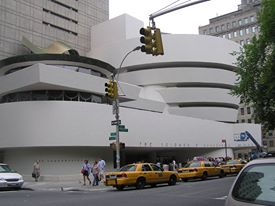