Architecture and Art in France

Commonly shortened to Centre Pompidou and also known as the Pompidou Centre in English, is a complex building in the Beaubourg area of the 4th arrondissement of Paris, near Les Halles, rue Montorgueil, and the Marais.
It houses the Bibliothèque publique d’information (Public Information Library), a vast public library; the Musée National d’Art Moderne, which is the largest museum for modern art in Europe; and IRCAM, a centre for music and acoustic research.

It is named after Georges Pompidou, the President of France from 1969 to 1974 who commissioned the building, and was officially opened on 31 January 1977 by President Valéry Giscard d’Estaing.

The sculpture Horizontal by Alexander Calder, a free-standing mobile that is 7.6 m (25 ft) tall, was placed in front of the Centre Pompidou in 2012. 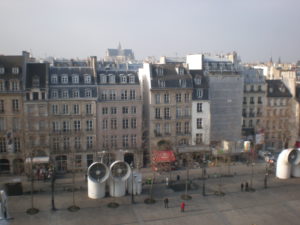 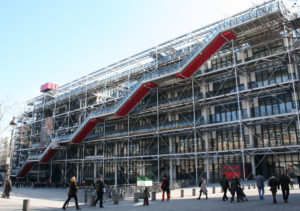 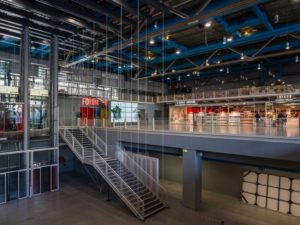 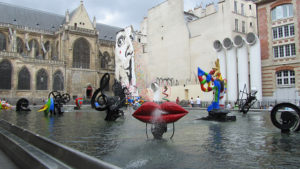 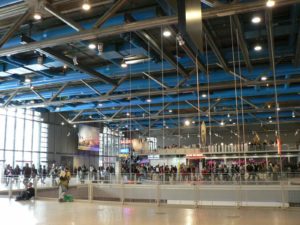 The building of the Louis Vuitton Foundation  started in 2006, is an art museum and cultural center sponsored by the group LVMH and its subsidiaries.

The building was designed by the architect Frank Gehry, and is adjacent to the Jardin d’ Acclimation in the Bois de Boulogne of the 16th arrondissement of Paris. 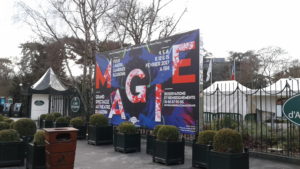 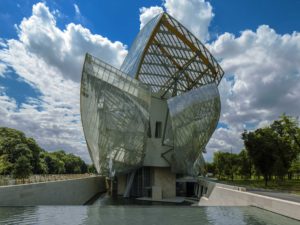 The Louvre or the Louvre Museum , is the world’s largest art museum and a historic monument in Paris, France.

The museum is housed in the Louvre Palace, originally built as the Louvre castle in the late 12th to 13th century under Philip II.

In 1682, Louis XIV chose the Palace of Versailles for his household, leaving the Louvre primarily as a place to display the royal collection, including, from 1692, a collection of ancient Greek and Roman sculpture.

In 1692, the building was occupied by the Académie des Inscriptions et Belles-Lettres and the Académie Royale de Peinture et de Sculpture, which in 1699 held the first of a series of salons.

The Académie remained at the Louvre for 100 years.During the French Revolution, the National Assembly decreed that the Louvre should be used as a museum to display the nation’s masterpieces.

After architects Mario Bellini and Rudy Ricciotti had won an international competition to create its new galleries for Islamic art, the new 3,000 sq m[58] pavilion eventually opened in 2012, consisting of ground- and lower-ground-level interior spaces topped by a golden, undulating roof (fashioned from almost 9,000 steel tubes that form an interior web) that seems to float within the neo-Classical Visconti Courtyard in the middle of the Louvre’s south wing.

The galleries, which the museum had initially hoped to open by 2009, represent the first major architectural intervention at the Louvre since the addition of I.M. Pei’s glass pyramid in 1989

The Louvre Pyramid  is a large glass and metal pyramid designed by Chinese-American architect I.M. Pei, surrounded by three smaller pyramids, in the main courtyard (Cour Napoléon) of the Louvre Palace (Palais du Louvre) in Paris. The large pyramid serves as the main entrance to the Louvre Museum. Completed in 1989, it has become a landmark of the city of Paris.

Commissioned by the President of France, François Mitterrand, in 1984, it was designed by the architect I. M. Pei.

The structure, which was constructed entirely with glass segments and metal poles, reaches a height of 21.6 metres (71 ft).

It consists of 603 rhombus-shaped and 70 triangular glass segments. 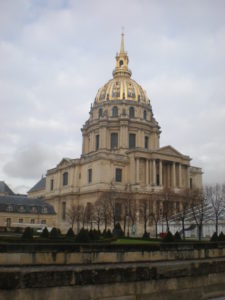 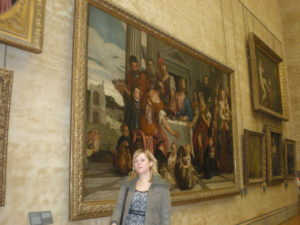 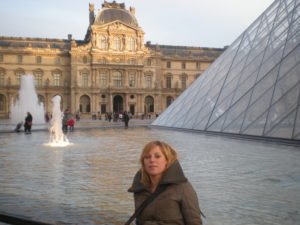 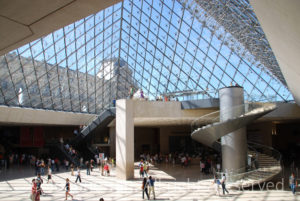 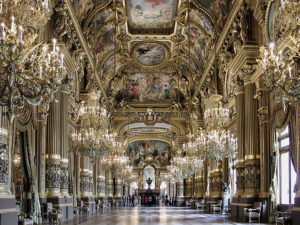 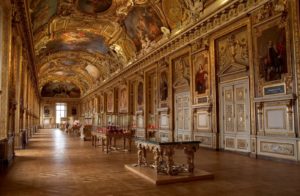 Musée de l’Institut du Monde Arabe- The Arab World Institute  is an organization founded in Paris in 1980 by 18 Arab countries with France to research and disseminate information about the Arab world and its cultural and spiritual values.

The Institute was established as a result of a perceived lack of representation for the Arab world in France, and seeks to provide a secular location for the promotion of Arab civilization, art, knowledge, and aesthetics.Housed within the institution are a museum, library, auditorium, restaurant, offices and meeting rooms.

The building was constructed from 1981 to 1987 and has floor space of 16,894 m2. The Architecture-Studio together with Jean Nouvel, won the 1981 design competition.

This project is a result of funds from both the League of Arab States and the French government, with the cost of the building totaling around €230,000,000.

The motifs are actually 240 photo-sensitive motor-controlled apertures, or shutters, which act as a sophisticated brise soleil that automatically opens and closes to control the amount of light and heat entering the building from the sun. The mechanism creates interior spaces with filtered light — an effect often used in Islamic architecture with its climate-oriented strategies. The innovative use of technology and success of the building’s design catapulted Jean Nouvel to fame and is one of the cultural reference points of Paris. 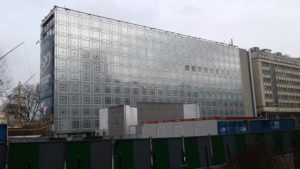 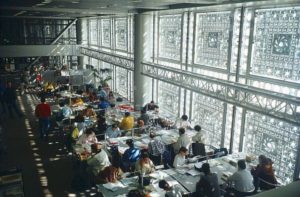 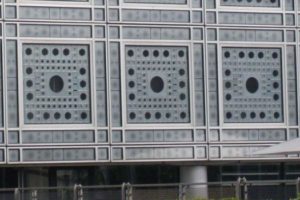 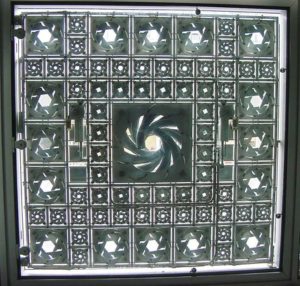 Villa Savoye  is a modernist villa in Poissy, on the outskirts of Paris, France. It was designed by Swiss architects Le Corbusier and his cousin, Pierre Jeanneret, and built between 1928 and 1931 using reinforced concrete.
A manifesto of Le Corbusier’s “five points” of new architecture, the villa is representative of the bases of modern architecture, and is one of the most easily recognizable and renowned examples of the International style 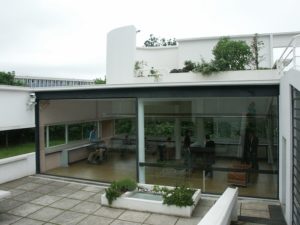 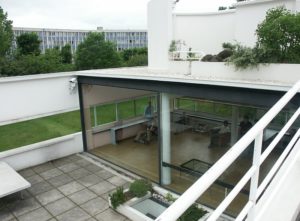 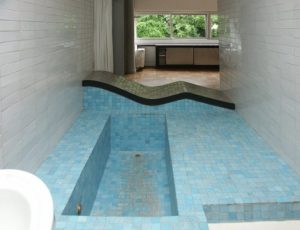 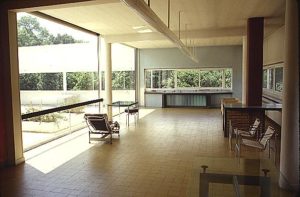 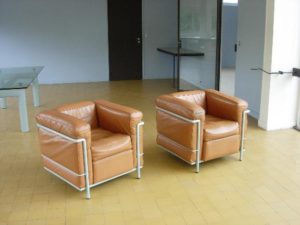 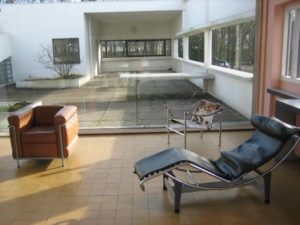 The museum complex has four buildings, occupying 30,000 sqmt, which, along with the garden, cost 233 million euros.
The main building containing the galleries of the museum is 210 mt long and covers 4,750 sqmt , and has a 3,000-sqmt  terrace on the roof, the largest roof terrace in Paris, which also has a restaurant and mediatheque.

It is constructed like a huge bridge, ten meters over the garden, supported by two large concrete silos at the east and west ends and by twenty-six steel columns. As the trees of the garden around the building grow, the columns will be completely hidden and the building will appear to be resting on the treetops. 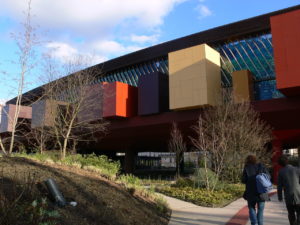 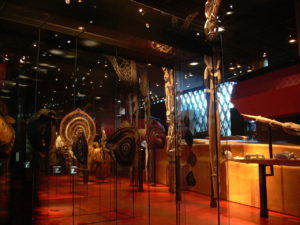 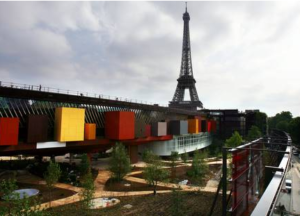 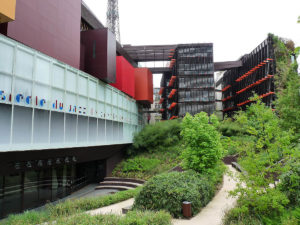 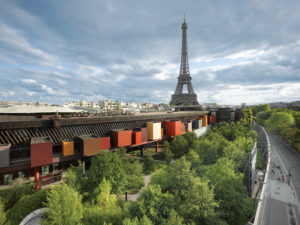 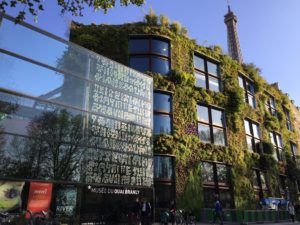 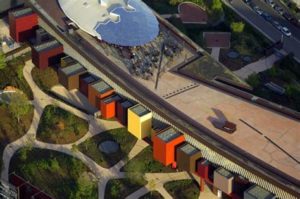